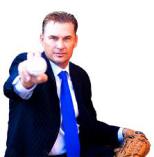 Playing in the big leagues was a massive goal. The percentages were highly against me ever making it. I never gave into the percentages; I knew it was possible and if it was possible then I knew I could make it. I became a major league player at the age of 22 in 1988 with the Toronto Blue Jays. I failed my way through 15 seasons where I landed on 3 World Championship Teams. Yes, I said failed. Failing is a huge part of success. I learned some incredible lessons in my journey playing major league baseball. I had some of the greatest coaches and mentors along the way. I played with some of the most gifted athletes in the world and I had a front row seat to their goals, mindsets, training, failures and successes. I learned something from each and every one of them that helped shape my career and life.

Your form message has been successfully sent.

You have entered the following data: