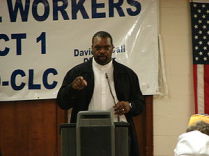 Originally from Live Oak, FL, Edmund Nelson is a former NFL football player who played in the league for 7 years. Before falling in love with the game of football, Edmund traveled the world with his family as an army brat living in bases across Frankfurt, Germany.

After moving back to Tampa, FL, Edmund attended C. Leon King High School where he played football and won the Guy Toph award for Tampa’s most outstanding football player. Edmund was drafted to the Pittsburgh Steelers, but also sported New England Patriot and Cleveland Brown jerseys throughout his career. His true loyalty, though, will always be with his alma mater - Auburn University.

Before playing in the NFL, Edmund played as a defensive lineman for Auburn, where he won the prestigious Cliff Hare Award. The award is given to the student who demonstrates exceptional academic and athletic achievements, and exhibits excellent leadership, integrity, and courageous qualities. While Edmund boasts extensive defensive MVP and linemen awards, his true prizes are his wife Cynthia, their three children, and his grandchild.

After his NFL career ended, Edmund had a successful broadcasting career with KDKA-TV as a Steelers Analyst and Color Commentary during preseason broadcasts for 17 seasons.  Additionally, Edmund has been an Agent for State Farm for over 28 years in Pittsburgh, PA.

Edmund speaks to audiences about teambuilding. His rich and humorous storytelling engages audiences and keeps them on the edge of their seats.

Your form message has been successfully sent.

You have entered the following data: